Soon Christmas will be here. 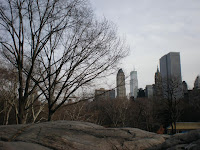 As i am being asked repeatedely for translation of some texts, please find my best pass on this one, please pardon my...french :)


She looks through the windows at the joggers running around the Central Park reservoir. No sound reaches the eighth floor. Lying on the sofa she distractedly chews the brown strip bar she just bought furtively in front of Saks Fifth Avenue.
A bitter taste that rises to the head and reminds her unconsciously of an afternoon she had spent on the deck of the boat of Jim Baker on Lake Tahoe. Jim wanted to take her on a tour of the brothels of the Nevada desert. She had given him a blowjob and it had made the day. Jim is dead anyway. An accident driving his Mustang. Two years? Three can not be.

There are no more leaves on the trees at this time of the year and one can guess that snow will come without further delay. Another winter.
She will soon be fifteen years old. Esther, her mother, had promised to call to celebrate. But she had already made the same promise last year, and with her trip to the Maldives islands, she had not been able to do it. The communications are not perfect it seems in those islands.

Anyway she has bought several of the brown strips for the occasion with a few bottles of Russian vodka. In the jacuzzi on the terrace this should do the trick. She puts her shawl back on her shoulders. It's cold tonight.

She puts a Coldplay disc on, and watches her face nicely madeup in the mirror. She gently caresses her legs. They are smooth and thin. She could call Mike the concierge. She knows how much he loves to take her the doggy way on the sofa with his face turned towards Central Park. Once a week he takes her like this, in a violent way, sometimes two, when it burns too much between her legs. Well it's too cold. It is said, she will call him.

Mike never ends. He had promised, already a quarter of an hour ago, to be there in five minutes. He must still be commenting the last baseball game with Zak, his buddy from Harlem, in front of the building under the red canopy of the front hall. She is trembling of cold and hot. She looks down at the small horse carriages passing with their hord of hilarious tourists perched on them. They look so small. It is decided, if Mike is not there in ten minutes she will join them. She looks at her Rolex in a hagard way. There. Fifteen minutes already. She opens the windows, puts the shawl with great caution back on the sofa, adjusts her hair in the mirror, climbs the railing and jumps.

The phone rings. Three rings before the answering machine begins to register .

"Sweetheart it's Esther, your mother, you need to tell me me what you want for your birthday and for Christmas. This is coming so fast"

Yes it is true, it will soon be Christmas.
Publié par Marc de Gondolfo à l'adresse 6:12 AM

This text in english takes another dimension...
Very interesting!
Indeed to you Gondolfo

This ovly Gondolfo! Thanks for the translation, that's a great english btw, better than mine hehe

I wish i speak english as well as your write it.
Many thanks for this text.

Because they are worth it